The Unethical Nature of Ethics Training 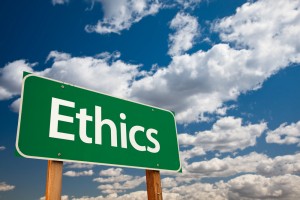 This month the IRS finds itself in the crosshairs; last year the Secret Service scandal thrust a disgrace into the limelight. Each time something like this happens, the U.S. suffers embarrassment on the international stage.

As someone who has spent much of her adult life as a trainer, I speak with some authority when I say this is ridiculous. About 40 percent of the time, training doesn’t address any true strategic objective other than to have some training. It accomplishes nothing but costs dearly in time and money.

Starting to see a pattern?

About 20 percent of the time, participants in the training learn some critical skills that improve their job performance (think recurrent training for airline pilots).

I should add that 86 percent of statistics are made up.

In the case of the Secret Service ethics training, I’d like the job of designing the program. It would be a short training day with two modules:

Module One: Do what’s right.

Years ago when I taught at Washington University in their Leadership in Technology graduate program, I mentioned to some senior Boeing IT professionals that I thought ethics training was a waste of time and money since you can’t really teach integrity; you can only explain protocols, procedures and consequences.

One student expressed umbrage. He informed me, in no uncertain terms, that if it weren’t for Boeing’s yearly ethics training, he’d never get caught up on his emails and paperwork.

The IRS and Secret Service needs to do some things differently, no argument. But training isn’t the answer, and neither is the latest “do something” initiative—to send “chaperones” with the agents. So now, in addition to paying for the requisite agents, we need to pay for babysitters? What happened to appointing a senior team member who has accountability for those in the chain of command? As in most cases like this, the fault rests on the shoulders of the leaders and the culture they have allowed to evolve.

Address those issues, and you’ll have a project that could actually engender change.