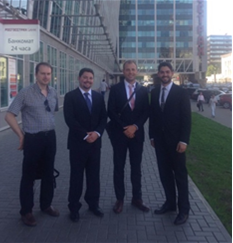 blower was contacted by Aaron Elster who is a graduate student at the College of Business Administration at Loyola Marymount University in Los Angeles, California. Bloomberg Businessweek ranks this college as part-time MBA program #6 in the United States, and its alumni have a global footprint.

Luke alerted Anatoly and Khvicha about the fact this group had not been successful in setting up their work in Moscow and asked to help them out.

This request for assistance came in before the visit to Russia for the first time and had to do with an integrative research study, Comparative Management Systems (CMS), which is considered the capstone of their graduate curriculum. Specifically, the group of these graduate students asked for logistical assistance in setting up meetings with bankers in Moscow/any localization of their survey and relevant assistance.

As an eight member team of graduate students from a variety of backgrounds: four law students: Aaron Elster, Kayla Walsh, Jon Yoel, Jon Reilly; an entertainment executive: Bradford Berling; two engineers: Mike Gregoryk and Shepard Harloe; and a Nigerian exchange student: Terngu Ngaji. The group is lead by Jeff Gale, PHD/JD, a renowned professor at Loyola and a highly sought after business consultant. Their goal is to complete comprehensive analysis on their subject matter, as well as gain exposure to international business cultures other than our own.

They are studying changing strategies in the retail banking industry in the United States, Russia, and Central Europe, and expert opinion and insight on this matter would be invaluable to our research. Their thesis is specifically examining how retail banks in different markets are adapting to changing business environments across three dimensions: demographic, technological, and regulatory changes. They are determined to learn how these strategies vary by market and why. The Russian retail banking industry has been one of the fastest growing banking industries in the world over the past twenty years. How Russian banks have thrived in response to changes in the Russian and global marketplaces is of tremendous interest to the group, as is how Moscow banks continue to do well in an evolving Russian market.

Given the fact Khvicha and Anatoly have already been working with banks on the compliance survey, it became possible to start asking around if any banks could meet with them to do an interview about retail banking industry in Russia. Anatoly translated their questionnaire and circulated among the banks he had been working with. Because of the ongoing tensions between the US and Russia related to the crisis in Ukraine, most of the banks contacted declined later. So after a few attempts a couple of banks agreed to have them over for a formal interview which was a huge success.

Anatoly accompanied them to interviews and also provided findings from interaction with other banks: statistics, IT infrastructure strategies for mobile banking, posted losses by biggest retailors, collected data on mobile applications and data verification from another banking project. Plus it has been agreed that Anatoly would play an important role upon the completion of the project and will get a final report to verify the data.

This is the first time ever that Working Group saves another project in a related area which has an international dimension. Our WG members Khvicha, Luke and Anatoly have been both lucky and happy to help out to obtain essential data for the Russian phase of their project for the period of May 20 – 22.

Their next stop is St. Petersburg and they have interviews scheduled with retail banking executives in Warsaw at Mbank, PKO, and the Central Bank of Poland, as well as in Prague at CsekaSporitenla and Komercni. Our WG wishes them luck in their project and hopes to help in its completion.